Overview
The Project
The App
Roundtables

The simulated scenarios presented in the Arabic content area of the Culture App offer an opportunity to experience different elements of Arabic-speaking cultures in interactive and thought-provoking ways. The scenarios do not offer “right” vs. “wrong” responses to particular cultural situations. Instead, they challenge the user by presenting several possible interpretations (ranging between 3 and 6), whose “cultural appropriateness” can vary significantly based on regional, social, generational, and other factors.

The judgement tasks in each scenario were rated by a panel of scholars from different parts of the Arab world living in the United States. The panelists represent different regional and sociocultural backgrounds within the Arabic-speaking world; all panelists  are also very familiar with American cultures and cultural attitudes. The actual rating that corresponds to each judgment task is a range that represents panelists’ feedback. A small range indicates greater agreement among the panelists, while a wider range indicates expanded perspectives. 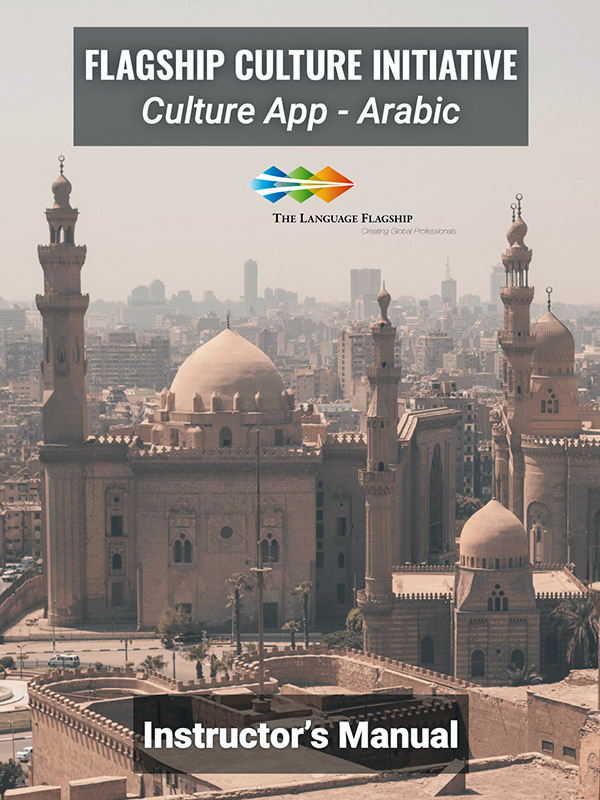 Each Arabic scenario is situated in a particular space and time, allowing users to familiarize themselves with the cultural diversity of the Arabic-speaking world. Thus, instead of the conventional country-based approach to regional diversity (e.g. Egyptian culture, Iraqi culture, etc.), these scenarios reference a specific cultural locale, for example, “a shopping area in downtown Cairo on Thursday evening.” Such specificity, presented in a context chart before the scenario vignette, implicitly highlights unique cultural aspects of downtown Cairo, which differs not only from comparable shopping areas of Beirut or Damascus, but also from similar areas in other Egyptian cities (Alexandria or Luxor), and even other shopping areas within Cairo itself, such as contemporary malls that have their own distinct consumer culture. Additionally, the specificity of time, such as “Thursday evening” – the busiest time in public spaces, when most Egyptian families go out – familiarizes the users with the rhythm and pace of life in Arabic-speaking cultures.

The bilingual structure of the Arabic content area targets different types of users and can accommodate a wide range of teaching and learning objectives. The English-language scenarios allow any user, regardless of their knowledge of Arabic, to engage with various cultural aspects of Arab societies. These scenarios may benefit diverse groups of learners – from freshmen students of Arabic, to medical professionals working with refugee populations, to active military personnel, to diplomats who are reassigned to an Arabic-speaking country with no prior training in the region. Additionally, the English-language scenarios can be adapted for a wide range of Arabic classes, where the students could, for instance, read the scenarios in English and then discuss them in class in Arabic.

The Arabic-language scenarios are Arabic versions of the English-language scenarios (i.e. the two areas have the same content). They can be used with different groups of learners who know Arabic at the ACTFL Advanced level (ILR 2) of proficiency and higher.

For each scenario available in the Culture App, various teaching materials have been developed by the FCI-Arabic team to supplement and extend the discussions, and to offer relevant authentic materials for language-based tasks. These materials are available in an open Google Drive, maintained by the Arabic Program at the University of Maryland.

Please feel free to use these materials to meet your educational goals. The materials are organized into folders divided by modules, topics, and specific scenarios. Additionally, the Google Drive contains lists of authentic sources, including literary works, films, TV series, etc. (in Arabic and English translations), for those who are interested in learning about particular cultural issues more comprehensively.

In the future, this Google Drive will be converted into a community-sourced collection of teaching materials based on Culture App Arabic scenarios. If you would like to contribute to the project with the materials that you have developed using Arabic cultural scenarios, please contact us at:

To eat or not to eat!
Social Ramadan
You are cruel people!
I want to go where I want to go!
“Moroccan Halloween”
Eid al-Fitr faux pas
Hajj – what changed?
Ashura in the village of Nabatiye

The Evil Eye
Should I be seeing this?

What is wrong with lounging around the house?
Why is the grandmother upset?
You do you!
Where’s the cat?
The kids are alright!
Thanks, but no thanks

I am not getting along with my host family and I don’t know why!
“Do not enter!”
Who is the American in question?

“Those who eat alone will choke!”
Where are your manners?!
Please help yourself!
Not in my place!

Hammam Bildi: What do you mean I have to take off all my clothes?!
But she was taking pictures too!
Coming out in Lebanon

To date or not to date?
A tale of two weddings
Don’t ask don’t tell
You are doing WHAT tomorrow?!
Let’s not talk about this ever again

Liberating the hijab
A mistress

A taxi to Jubail
Merry Christmas to all
This place is pretty gross!
Tread gently: the Palestinian Question

Why aren’t you calling back?!
Would you like to join us?
Are you okay?!
What is your name again?

This is my seat!
Who is that person near my car?!
Taxi or Uber?
This is not cheap!

Shopping, Markets and Other Public Spaces

Do you take me for a fool?
Please help me get home!
This is ridiculous, leave me alone!!!
What’s a “receipt”?
Are we really in Egypt?!
Street beggars

What do I do now?
Everyone is staring at me!
Life goes on?

Why is she so cold to me all of a sudden?

The Language Flagship is a national initiative to change the way Americans learn languages through a groundbreaking approach to language education through a network of programs at institutions of higher education across the United States. The Language Flagship graduates students who will take their place among the next generation of global professionals, commanding a superior level of proficiency in one of ten languages critical to U.S. national security and economic competitiveness.

This website has been developed and is maintained by The Language Flagship Technology Innovation Center. The content of this website and of the Culture App do not necessarily reflect the position of policy of the U.S. government. No official government endorsement should be inferred.